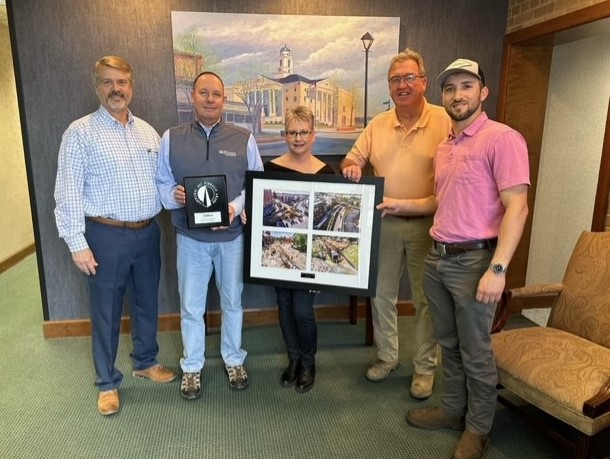 Town Creek Culvert is an existing stormwater conveyance draining approximately 250 acres in Uptown Greenville, NC that can trace its origin to an existing streambed prior to 1935. Due to the deteriorated state of the stormwater conveyance, failing street crossings, and flooding issues within the Uptown Greenville community, the replacement and upgrade of the existing culvert was undertaken.

Constructed when the watershed was mostly undeveloped, an existing brick drainage tunnel enclosed most of historic Town Creek from near the Tar River around the perimeter of what was then the downtown commercial area. Later projects enclosed other segments of the creek closer to the river and on the far upstream extremity with circular piped conveyances. The tunnel and piped conveyance designs were significantly undersized for the expanded and built-out center city environment, and contributed to numerous flash flood events over the past 20-30 years in several hot spots within the downtown urban core.

The 2.5-year construction phase project included replacement of the brick tunnel and circular pipes, providing significantly upgraded stormwater conveyance through the central business district to the Tar River. Included in the project was redirecting a portion of the drainage from the new Tenth Street Connector project through the new conveyance, eliminating the need for reconstruction of another drainage outfall through the urban core.

The new conveyance consists of a series of open channels, box culverts and conventional circular concrete culverts. The project also included daylighting specific segments of the previously piped creek with two regenerative stormwater conveyances as well as a number of other new Stormwater Control Measures (SCMs). The 3,900 LF project corridor extends from the river along the path of the historic creek, under Reade Circle and ending along Ninth Street. 2500 LF of 10’x8’ reinforced concrete box culvert was installed at depths up to 25 feet. The project also included circular pipe conveyances, with approximately 2,500 LF ranging from 15” to 84”. In addition to roadway reconstruction and surface restoration, relocation of existing utilities that were above the existing tunnel was a significant portion of the project.

To meet the tight contract schedule, the project was attacked by working from both ends (north and south) of the project towards the middle. A tremendous amount of coordination amongst multiple utilities, contractors, and public businesses was undertaken to ensure a limited work site duration.

Among the many challenges faced by the Town Creek Culvert Project, the biggest was taking the existing utility infrastructure (water, sewer, electric, gas, cable, telephone, special fiber) and threading a new box culvert right through the heart of Uptown Greenville – similar to performing open heart surgery while keeping the patient awake during the process! Sewer, water, and gas mains were temporarily supported, worked around, or replaced. Electric, cable, telephone, and special fiber were temporarily supported and/or rerouted. The older infrastructure within an urban environment forced daily interactions and planning sessions with utility owners to ensure that all utilities were able to be accommodated in the new project footprint.

The project was successfully completed without any injuries resulting from unforeseen utility strikes, and without any major loss of utilities. And, using value-engineering saved the City of Greenville $750,000. The Town Creek Culvert project was completed on time, under budget and safely.